Before the blog starts off I need to thank Midgette, Sear, and  Whammo for their hard work putting it together and getting this functional. Without them, our community would not be as fantastic as it is now.

This blog will cover much of everything Warcraft related, from creating and managing guilds, to recruiting, raiding, personal improvement, paladins, and theorycrafting. This will all of course have anecdotes and stories from the past 10 years of Warcraft.

All stories have a beginning, and ours starts in the Warcraft beta, September 2004. A number of friends had come from different backgrounds, end-game guilds in Everquest, Shadowbane, Asheron’s Call, Ultima Online, and Dark Age of Camelot.  We had randomly found each other in Beta and started the foundation that would one day be one of the oldest raiding guilds in the game.

Initially the EQ friends and I made a guild: Liquid Courage in preparation for Scotch Hour 10 years later. We had a closely knit guild, just a bunch of friends leveling up.  And by random happenstance the friends from Beta ended up on Stormrage. We didn’t plan to see each other after Beta. We wanted to make a raiding guild but needed to think of a name. You see, names are important, they help define you. If your guild name is “Trolls R Us” or “Asshats and Friends,” certain people will flock to your guild based off the name. This was especially true in the early stages of the game. We voted on different names, Element of Darkness, The Relentless, and Death Jesters. You know what was chosen.

So the dozen or so of us formed Death Jesters.  The Canadians, Swedes, South Africans, a couple Americans and the gold farmer. We had now formed a guild, Stormrage’s premier Swedish raiding guild. We probably had 6 or so Swedes in our guild then. But what next? Random bunch of Jackalopes trying to run a guild, did we have any clue what to do? Well some of us had led guilds in the past, but we could only apply so much from previous MMOs to Warcraft.

What kind of guild did we want to be? Were we a family guild, were we going to be as hardcore as we were in Everquest and other MMOs? How did we want to define ourselves? When someone saw a Death Jester walking around Ironforge, what should they assume about that person? Elitist asshole? Good person? Helpful? Amazing raider? So we made a charter found here: http://www.death-jesters.net/charter.php   Take a look and you’ll see what we originally drew up was pertinent to Vanilla WoW but it is every bit as relevant today.  That charter should reflect your goals, your ideals and what it means to be part of Death Jesters/Cobra Kai Dojo/Trolls Anonymous.

Your guild tag is like a uniform you wear, and wear it with pride. That is your logo, your name, and what defines you. Yes its ‘just a game.’ But it is also ‘just your valuable time.’ Why waste it? If you want to be a dickface, I’m sure there is a cesspool just for you. Why be somewhere you don’t want to be? Doesn’t everyone deserve to be treated with respect? Just because you’ve killed that big pixel boss weeks before everyone else, does it entitle you to be an elitist jerk? When a random person sees you behaving like that, they will generalize your guild that way. Yes sometimes there is that bad apple, but that is how reputations start. That asshole in your guild, was a dick to someone in an LFR/pug/trade chat. They looked up your guild name and thought to themselves “I bet this entire guild is like that.” Even though they are wrong and they generalized your entire guild, next time they talk to their friend about good guilds or bad guilds to join, your guild won’t be at the top of their list. Their friend who heard bad things about your guild, could potentially be that amazing player you’re missing out on and they will go to another guild just because of their friend’s recommendations.  Everyone need to realize how important a reputation can be, and how important a reputation should be.

So we were starting a guild, what kind of people did we want to recruit? Well anyone that didn’t seem like a douchebag, or was named xxLegolasxx. The only avenues we had for recruitment were trade chat(which we have never used to this day), realm forums(which no guild used for recruitment), and simply running dungeons with people. That was the most effective way we found to find good people. We simply invited pugs. “LFR 1 more UBRS, full on huntards” In that way  we were able to chat with people that we invited, see if they were able to follow simple commands: Sheep this, Fear this, Don’t stand in fire. They were being interviewed for a position and they didn’t even know it. If we liked them, we offered them a spot as a trial. Since there were only three established raiding guilds on the server, we were quickly becoming a formidable force on the scene. Some days I would just do a random dungeon with people I didn’t know just to see if we could find some good potential players. 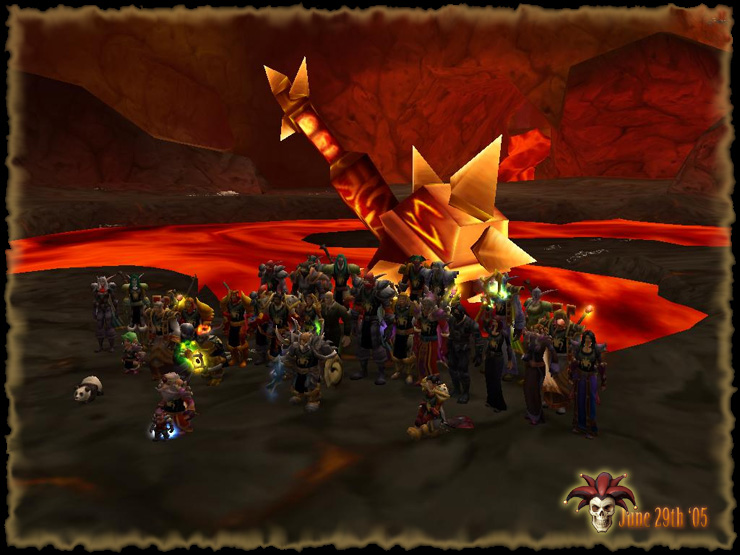 Even for our first boss kills of Onyxia, Ragnaros, and other Molten Core bosses, we brought random people in. If they had dungeon blues, we gave them a shot. So when people ask me what I think of pugs being brought in to fill spots in their guild raids to kill bosses, I shrug and say “So what? We did it, to get bosses down.” Your raid leaders and guild leaders are problem solvers. If you are running a small guild and emergencies arise, people are missing, you have a few options. You can cancel the raid, you can try running a raid with not enough tanks, healers, dps (good luck), or you can find a solution. Find a random person, bring a friend or a casual player in for a day. Give them the opportunity to raid because you don’t know if you have that diamond in the rough that just needs a little experience. Make it work, don’t just whine and complain about it.

Ultimately the best way to start your guild is start small, find players, and make friends with people with the same mindset as you. Too many guilds like Rome, grew too fast, too big and in the end collapse. Start slow, get people you like hanging around with, have the same expectations from each other. Push each other to perform better, fight, compromise with the best interests of the guild in mind. Those players will become your best friends, and your officers. You’ll play hockey with them, go to their weddings, see their kids grow up, and send each other Christmas cards. Some of your friends will move on, you’ll barely talk to them, they’ll move onto other guilds or will stop playing the game entirely. And after 10 years of running a guild you’ll wonder, “Was it all worth it?” Were the sacrifices you made, the time you spent cultivating the right atmosphere, becoming friends, laughing and slaying dragons together worth it? If you did things right you’ll have an easy answer.