The issue isn’t the system, but players’ attitude toward the system.

Players have been complaining about the forced AP grind for a few weeks now.  The sky is falling once again. But is it really a grind? Is it forced? Perhaps it’s a problem of perception.

Convincing yourself that you MUST clear the map of all artifact
power quests every single time they come up is just insane. How many pet battles can one do in one day?! Why would you want to pvp so much?!

Kidding aside, people confuse ‘there is always something to do’ with ‘all of this must be done.’ 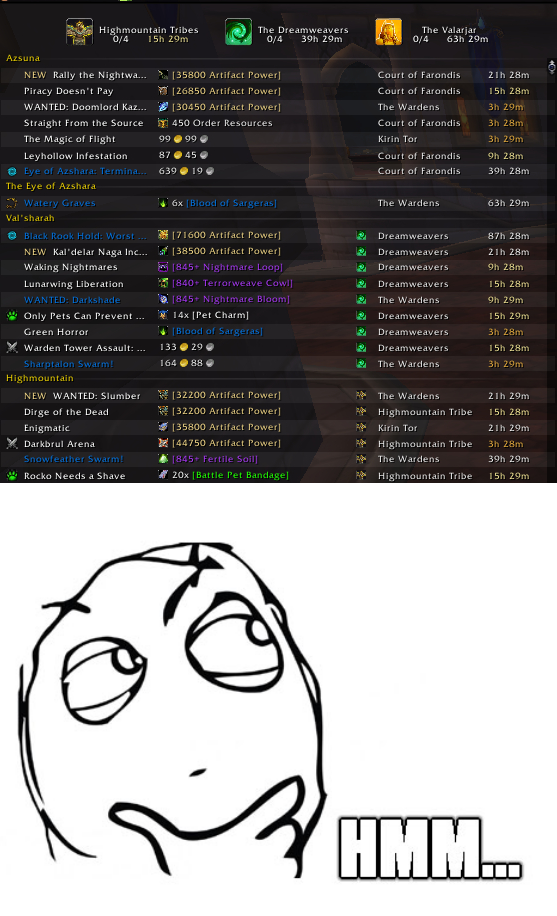 Convincing yourself that you have to clear that entire map all the time is insanity. Most mythic players do not do that. Those quests just keep coming, they will always be there. And they are nowhere close to the most efficient way of gaining AP. They are an option for anyone that wants to complete solo content.

People need to take responsibility for their own time management. You are in control of how much time you spend doing content or ‘grinding AP.’ Is the time invested worth the miniscule AP gain? Probably not. What is your time worth in terms of AP, or gold? It’s a problem players have created for themselves (like split raids) and continue to complain about.

Finally there is a system that allows continuous progression. And people naturally complain about it. If we had a weekly cap, or no such system, players would complain there was nothing to do outside of raids like in WoD (False, there was plenty to do). Players would complain that we’d be back to the style of “log in 2-3 times a week and do nothing in between” and there was a “lack of content.”

And if you are of the mindset that you do need to grind that AP, and you subject yourself to inefficient ways of AP grinds: pugging dungeons, LFR, pet battle WQs, then the problem definitely isn’t the system.

Is there any sensible way to give players what you want? Would you be able to come up with a system that would not leave players unsatisfied and frustrated?

And don’t think for a second that you are forced by your guild, your raid leader, and your friends to grind out AP. It’s your choice.