Nobody likes looking for a guild,  just as nobody enjoys looking for a new job or new friends.  But this is just the predicament that so many people/players are in.  Many of you are simply not enjoying your time in Warcraft  because you’re not in the right guild.  This is a social game,  a massively multi-player game.  You can play solo, but there is so much more enjoyment from playing with friends.  People play for a bit, find nothing to do, nobody to hang out with and then quit out of boredom. There is SO much to do!  And there are so many people to do those things with!  So let me help you!

Looking for a guild can be a pretty daunting task,  but with a little bit of preparation beforehand,  you’ll make it easier on yourself.  Knowing what you’re looking for ahead of time will likely result in less frustration for you.

So start asking yourself questions:

What kind of guild do I want? PVE or PVP focused?

How hardcore do I want to be? Mythic Raider?

– Raiders come in all difficulties. Maybe your priorities have changed and it is no longer important to be a realm first raider.

How many days a week do I want to raid?

-A 5 day raid guild doesn’t necessarily do better than a 4 day raid guild. Looking at a guild’s rank is often indicative of this.

What days are my preferred raid days that I can stick with?

– Do I want my weekends free? I play hockey on Mondays so maybe any guild that raids Mondays is out of the question.

What kind of loot system do I prefer or do I even care about that?

– Is it a Loot Council, DKP, EPGP, Suicide Kings, Rolling?

Am I willing to server transfer? What about faction transfer?

– Can I afford the server transfer? Do I want to leave the best faction and join the rock-eating horde?

One of the most common places to find leveling or casual guilds. You will not find many serious guild posting in trade chat and there is a connotation of trade chat guilds being bad and they often fall apart. This isn’t  always the case. Trade chat is a really easy way to look for those early guilds that want to do dungeons and early raids together.

“<Cobra Kai Dojo> recruiting for all classes for our guild. We are a fun ninja guild that has plans to raid in the future. Full access to repairs, food, gems. Initiation: Must sweep the leg.”

These guilds often will not be the raiding guilds that are killing heroic/mythic bosses, but they’ll probably have a fairly good base to start learning encounters and the game.

These forums used to be full of drama and ninja-looter accusations. But these days it is mostly recruitment, raid carries, CM carries and profession kit sales.  Realm forums are a much more effective way to find a raiding guild than trade chat.  Players that are a bit more serious about progression,  how much they value their time,  are more likely to have a recruitment template up for potential recruits to see.

Find your Realm forums here and look at all the guilds trying to recruit you!

The official recruitment forums open up your guild possibilities even more. If you are willing to faction and server transfer you have so many more possibilities for finding the right raiding guild, or even pvp guild. If you’re on a medium population server right now… think of these forums as a hundred times larger.

Example:  If you’re doing some online dating, you’re increasing your search parameters to all of North America instead of just your farm town.

This is one of the best tools to use to find a guild.  Most guilds, whether they be top raiding guilds or casual raiding guilds,  are using this website. It is very easy to use, just put in your own search parameters:

This sorts guilds based off your criteria based on their progression level.

Konrad is looking for a raiding guild.  He’s a 12/14 Protection paladin that likely has experience with Paragons Heroic as well.

He is clearly on EU based off his armory.  So at the top left under Guilds->Progress->West,  he would scroll down to EU.

He is looking for a 25man guild and would click the appropriate link.

He has now sorted all 25man EU guilds.

Because he loves to eat rocks and loves the aesthetics of mud huts, he would choose the Horde faction.  He also wants to raid 3 days a week in an English speaking guild.  And finally he is a paladin, but protection.

Once he hits Go, WoWprogress will sort all guilds that are looking for a protection paladin based off his criteria(3 days a week, Horde, English speaking). Those results look like this: 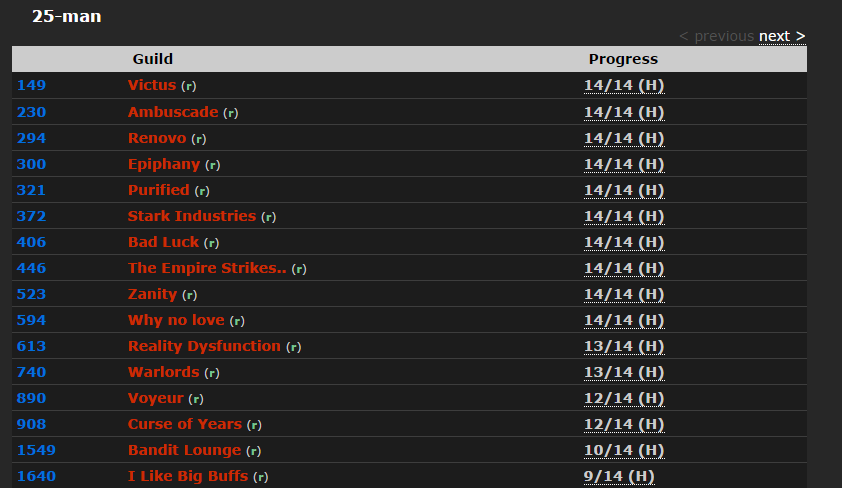 Because he knows he’s an excellent player, and he doesn’t want to go back a few steps in progression, he’ll look for a guild that is at least 12/14.

That is 14 potential guilds that may be his dream guild. He’d now go through each of them and see if they were the right guild for him but he has saved himself hours of looking for a guild on the EU recruitment forums.

If you’re an excellent player with a lot of experience,  these guilds should be courting you!  For Multiple recruitment places/sites,  make a template for yourself.  Sell yourself to your guild of choice and show them why you’re the player THEY want!

Make sure to include your musts for a guild:

What days you’re looking to raid,  what hours,  flexibility.  Include information about yourself, your previous guild histories, type of person and player you with type of humor.  Include your past progression and look at posting some of your logs.

Here is an example of a very basic recruitment ad.

Here is an example of a bad recruitment ad.

And Here  and Here  are examples of a pretty decent recruitment ad.

Whichever way you look for a guild,  your goal is to have many options available.  Don’t put all of your eggs in one basket.  Apply to multiple guilds,  post a great template so multiple guilds are interested in you.  We’ll cover applying to guilds next week.

Once you have many choices for guilds and numerous options, you can start narrowing them down.  Don’t always settle for an average guild.  Shoot for the stars!

Start research on these guilds and decide what else is important to you.

Do I care about the guild’s values and integrity?

How much do I value progression?

Things to look for in a guild:

So, I want to encourage those of you that are bored or unhappy in their current situation, to look for the right guild.  Regardless of your progression,  your raiding background, or how long you’ve been playing.  That dream home, that community you’re looking for, is waiting for you.  Put in the effort and find it, you may be suprised at the outcome!